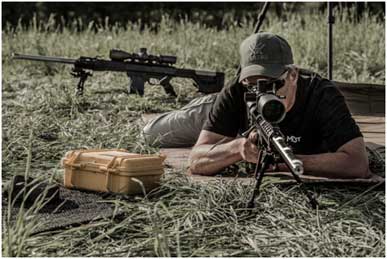 The intent of these articles is to introduce to a new shooter or experienced one to the different disciplines available, what equipment works and what does not, mental preparation, position, using a scope etc.

The name itself, Precision rifle applies to short range, under 300 meters, long range to 1000 meters, extreme long range beyond 1000 meters. Being precise with a rifle basically put means shooting a group of more than 3 rounds precisely at the aiming point. The group maybe outside of the bull or x ring but all the rounds are touching. Putting the group inside the bull or x ring is accuracy, not precision. To have the group inside the bull and all rounds touching is precise and accurate.

Most precision shooting is done either from a prone position or off a bench, bench rest.

Regarding the various disciplines available, the shooter needs to decide on which discipline appeals to them before buying equipment as the discipline picked is going to dictate what caliber, scope is going to work. For example, a 6PPC is an awesome round for benchrest to 200 meters but will not work at 1000 meters and likewise a 338 Lapua is the wrong choice for benchrest.

In Canada one of the disciplines is F Open. It originated in Canada buy a shooter from the West by putting a scope on a 308-target rifle and a bipod on the front. The discipline has evolved from conception. F Open is any caliber other than .223 or .308 shot prone using a front rest, not a bipod and weight is limited to 10 kg as shot. The other discipline that is similar is F/TR. A scoped rifle chambered in .223 or .308 only using a bipod that is attached to the front of the rifle and weight is 8.25 kg.

Scopes are used for both classes and usually are second focal plane and the magnification is around 24X at max, some scopes have higher magnification. I use a 15-55 magnification scope, personal preference.

The usual round count for a match is 85 rounds per day over 2 ½ days. Muzzle brakes are NOT allowed in F class. There is a time limit per stage and a time limit for each shot, 45 seconds. The targets are marked after each shot and displayed to the shooter. 3 shooters per target, taking turns shooting, referred to as Bisley style. You score the shooter beside you, so there are somethings going on besides trying to shoot. There are normally flags flying on the range to indicate wind direction and speed as the use of electronic devices including wind meters on the line is prohibited. Behind the line/firing point is fine but not on the firing point.

Note: the shooters move to different firing points during a match/practice. So, what you bring you carry. Vehicles are not allowed on the range. Loading the car after each relay and driving to the next firing point is not an option. A bolt action, single shot rifle is the norm for F class. If the rifle has a magazine a sled is put in to allow single shot feeding.

The next discipline is PR, Precision rifle. Classes vary depending on the club as some have .308 or .223 only allowed on the range, Pettawa while others allow whatever the range is templated for. Some clubs will have .223 and .308 together and anything outside of those calibers fall into open class. A 6.5 has an advantage over the .223 or .308, hence the difference, apples to apples kind of thing.

PR starts at 200 meters and goes to 800 meters normally. The targets are military vs F class which shoot on bullseye targets. PR has some interesting twists to it as you shoot as a team, shooter and spotter. The stages have different courses of fire, agony snaps, rapid follow up, movers. Most of the stages are not marked until the stage is complete so you may have missed 10 times and not know it. The spotter is a big part of this discipline as they are looking for the swirl of the bullet as it goes to the target or looking for splash and calling corrections to the shooter on what the spotter sees. There are time limits per stage and when the shooter has finished the stage the spotter now shots and the previous shooter now spots usually through a spotting scope as position behind the shooter is critical to see the swirl of the bullet.PR is shot of off a bipod primarily so a front rest and back bag are not needed, muzzle brakes are allowed. A bolt action rifle with a magazine is normal as some stages require a mag change during the stage.

Movement between stages is required as is butt duty. Not what you are thinking, and I will come back to it.

In conclusion a bolt action rifle without a mag for F class, with a mag for PR, any caliber that the range is templated for F open, .223 or .308 for F/TR and anything again for PR that the range is templated for. No muzzle brakes for F or F/TR, yes for PR. Usually a 30 “barrel for F, F/TR, shorter for PR. Scopes can be either FFP or SFP, usually higher magnification for F, F/TR than PR as F goes to 1000 yards, PR normally to 800 yards. Spotting scope and a windmeter.

Unlike the disciplines previously discussed, PRS is new to Canada and does not have hard and fast rules setout for timing and distances. These are at the discretion of the match director and how evil they feel that day. Very little of PRS is shot prone, but there is lots of positional shooting done. Off barricades, top of a drum, bed of a truck, etc. and numerous distances are shot at from the same firing point, usually 5 distances and 2 shots per stage with a time limit with a mag change. No spotter, just you the shooter working against time, changing positions, different distances. The targets in PRS are steel and usually 2 and 1.5 MOA in size. The targets are suspended and are side by side.
A MOA is a unit of measure, Minute Of Angle and equals 1.04 inches at 100 yards.
There is another unit of measure called MIL. Not short for Military but rather MILRADIAN, 1 MIL equals 3.6” at 100 yards.

No such thing as a “click” anymore. In F class and PR the shooter normally adjusts the scope for the different distances and wind using the windage and elevation turrets on the scope. There is no time in PRS to do it that way, but the shooter holds over for elevation and wind using the reticle in the scope. The scopes in PRS are normally first focal plane vs second focal used in F and PR. The difference is that a first focal (FFP) scope can be used to range with at any magnification as the subtensions never change at any magnification vs a second focal(SFP) where ranging is normally done at a very high magnification.

Scopes are one of the major pieces of equipment that must be chosen wisely. Expect to spend more on a scope than a rifle if you plan to compete.
For example, my F open scopes are 15-55 power and have a floating 1/8 MOA dot in the center with hash marks. They are all second focal meaning that as magnification increases the reticle stays the same size, but the object gets bigger. I can range with them, but I must do it at max magnification, 55 power.
On the other hand, my PRS scope is 6-24 power with a Christmas tree reticle, FFP. As magnification changes the reticle gets bigger as does the object but I can range at any power.
As I mentioned previously that the discipline will dictate what equipment works better than other.

Let us keep going down this rabbit hole. F class and PR the shooter is shooting from the same position, PRS not. In F and PR same distance for 10-15 rounds, PRS not. In PRS you might find yourself with targets from 400-1400 yards. You cannot shoot at 55 power with a SFP scope and have any chance to find your targets under time, usually less than 2 minutes for 12 rounds a mag change and change position 5 times. F class you have a 8 foot board to look for at 1000 yards, the bull ring is 5 inches. PRS might have a 2 MOA target at 1000 yards, 20 inches, big difference.

F class each shot is marked after the shooter fires and displayed. The shooter makes any corrections required and gets ready for the next shot; the target is available for 45 seconds.

PRS has different stages from same firing point and NO indication if the shooter hit the target other than ringing the steel. The shooter fires the first shot, miss at 400 yards. Why the miss? Wrong DOPE, not your favorite recreational weed but rather Data of Previous Engagement. Wind, elevation errors, wrong ballistic charts, the shooter is under the clock and a first round miss to most shooters really dictates the rest of the day for them.

This is one of the reasons that PRS shooters use FFP scopes at lower power and rifles with low recoil as they are looking for the swirl of the bullet and or impact splash of the bullet in the dirt. They see the miss, use the reticle to correct and hold off for the correction.

In conclusion a rifle with a magazine, FFP scope, muzzle brake with a barrel length of 26” chambered in 6 or 6.5 mm is the norm for PRS a spotting scope and windmeter with built in ballistics. 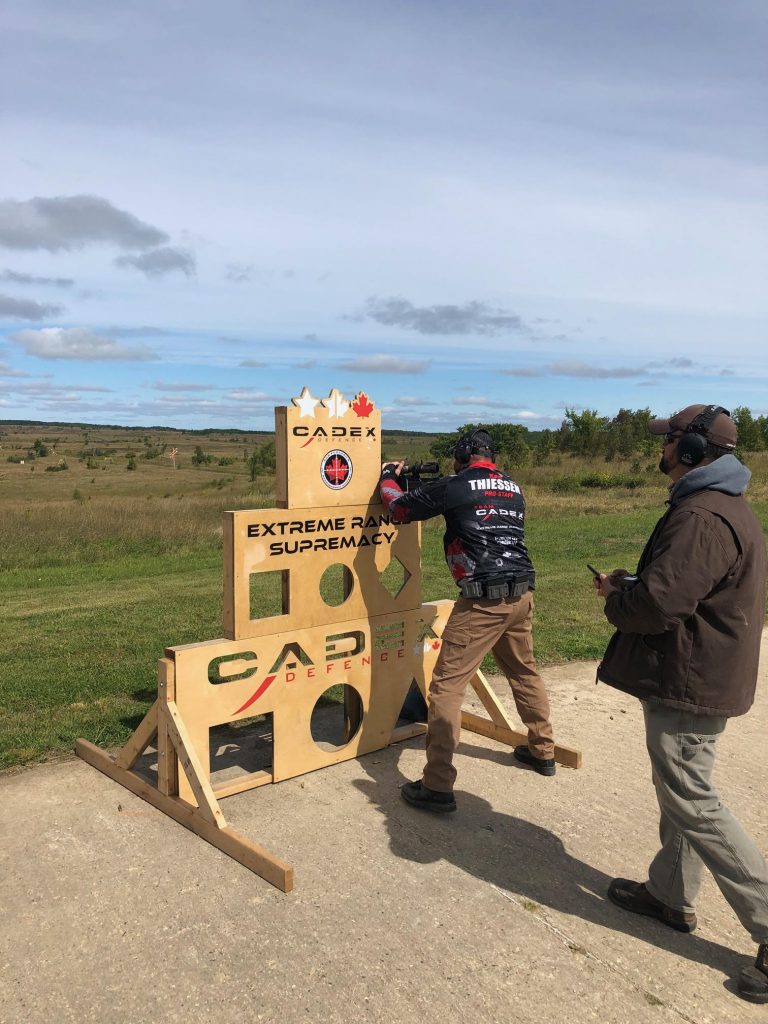 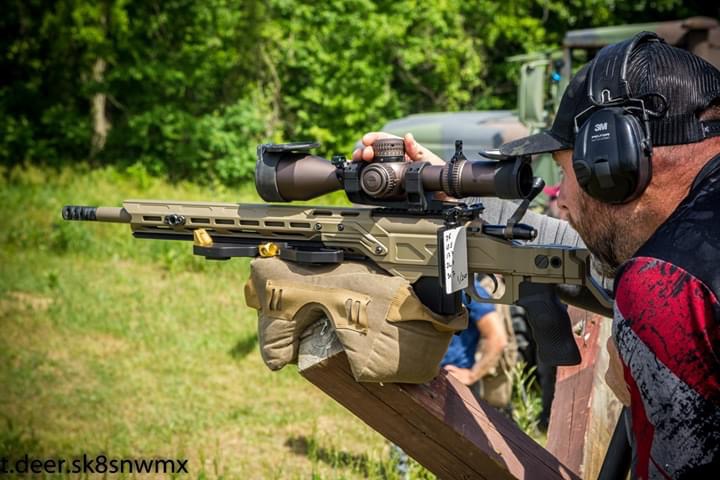 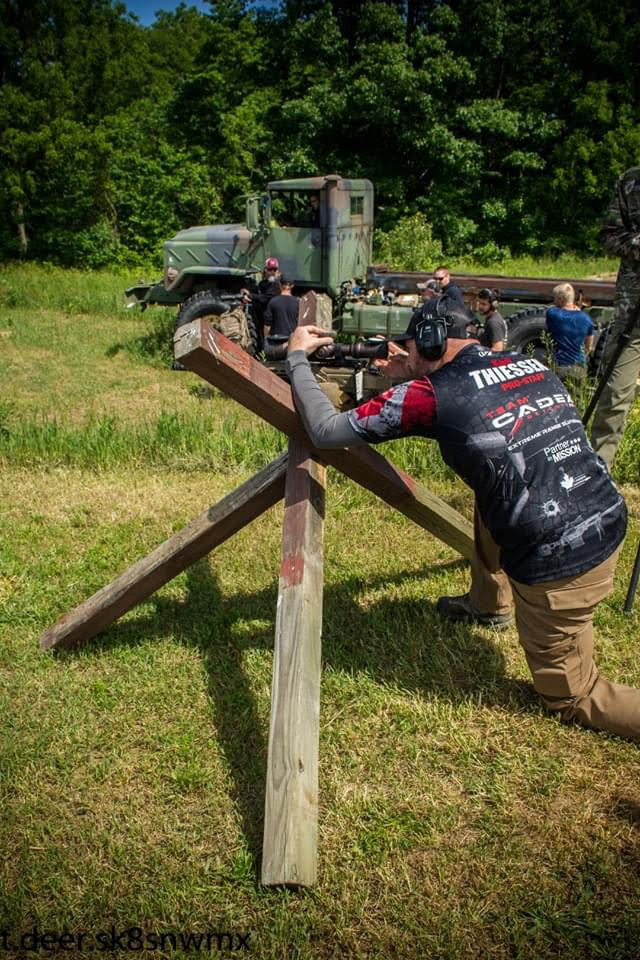